Have you ever been face to face with a majestic creature like the whale shark? Whale sharks are considered the largest fish in the sea. They can reach astounding lengths of 40 feet or more. Despite their colossal size, whale sharks are harmless to humans. Locally called “Butanding”, these beautiful creatures have earned the nickname, “Gentle Giants of the Sea”.

Oslob used to be a quiet coastal town in Cebu but the presence of whale sharks turned it into a buzzing tourist destination. If you want to encounter the incredible giant sea dwellers, join our 5-day liveaboard Philippines Nature Escape Cebu trip. On Day 2 of the trip, we’ll take you to Oslob where you can dive and snorkel with the biggest fish in the underwater world right after breakfast.

Whale sharks have provided local residents of Oslob a sustainable means of livelihood. The Gentle Giants attract local and foreign tourists which provide jobs for the people including boatmen and guides. Small businesses like souvenir shops, convenience stores, and snack stands also thrive because of tourism. The fishers and the local government protect the whale sharks and coral reef resources because these are the sources of their livelihood. 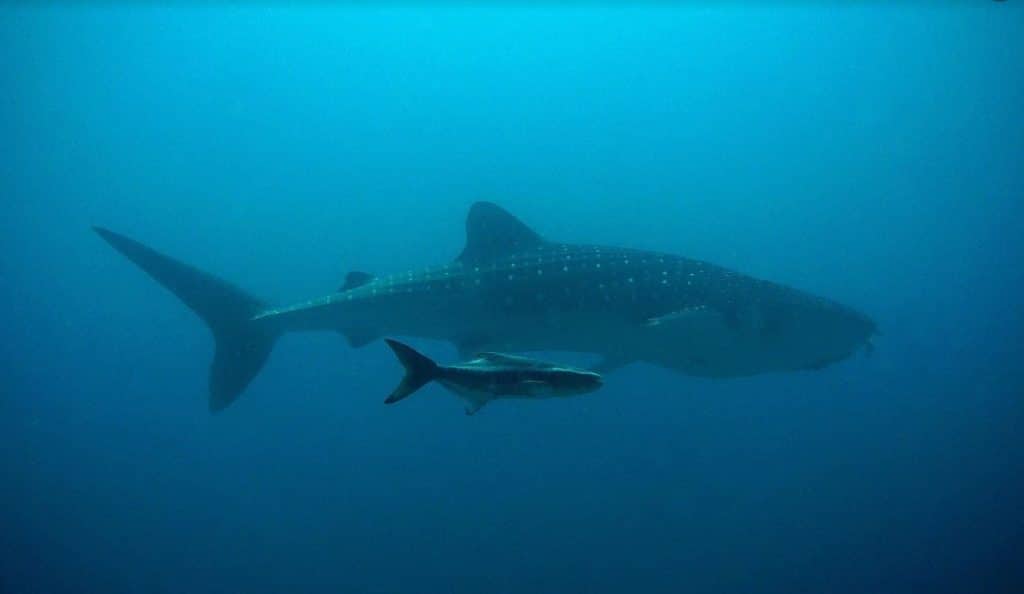 Anatomy of a Gentle Giant

Unlike sharks that have mouths on the underside, the mouth of a whale shark is positioned at the very front of its head. They have flat, wide heads with round-shaped snouts.

In the animated movie, “Finding Dory”, Destiny the whale shark always bumps into walls because she is nearsighted. This might make you wonder if whale sharks have bad vision. Despite their very small eyes (almost as small as a golf ball) in contrast to their huge heads and bodies, whale sharks can find their way in the water with ease. Scientists, however, are not sure if whale sharks rely on their sense of sight for navigation.

Whale sharks have very thick skin that is up to 10 cm thick. They are also noted for their three prominent ridges that stretch along each side of their body. These gentle giants have unique light-yellow or white markings (mix of dots and stripes) on their dark gray skin. Their distinctive markings are like human fingerprints because no markings are exactly the same. Scientists use them to identify individuals.

The mighty Butanding feed mainly on plankton, shrimp, and small fish. These filter-feeders jut out their mouths to passively scoop and strain everything that lies in its path. Just imagine a mouth that is about 5 feet wide. That’s practically the height of an average person. With a mouth as immense as that, they could easily gulp a considerable amount of food. A juvenile whale shark alone can eat an estimated 21 kg of plankton per day. They have more than 300 teeth but since they are filter feeders, they do not use their numerous teeth for chewing.