Tubbataha is considered the Mecca of Philippine diving and recognized as the only Asian UNESCO WORLD heritage site that is marine in nature. Divers can access the park during the limited weather window between late March to mid-June.

The park is under the strict protection of armed rangers all year round to preserve the beauty of this underwater world. As a result, visitors have the privilege of seeing the spectacular reefs and marine life like manta rays, turtles, schools of fish, and whale sharks.

Sponges as big as refrigerators, giant sea fans, and delicate soft corals make the vertiginous walls look like hanging gardens. While invertebrates and sponge crustaceans create a mural-like canvas effect on the walls.

Exploring Shark Airport is one of the most exciting highlights of this cruise. This reef edge contains coral bommies and sandy patches where white tip sharks are usually found lying on the sand, resembling parked airplanes at an airport. Schools of snappers and surgeonfish can also be spotted in the reef top. 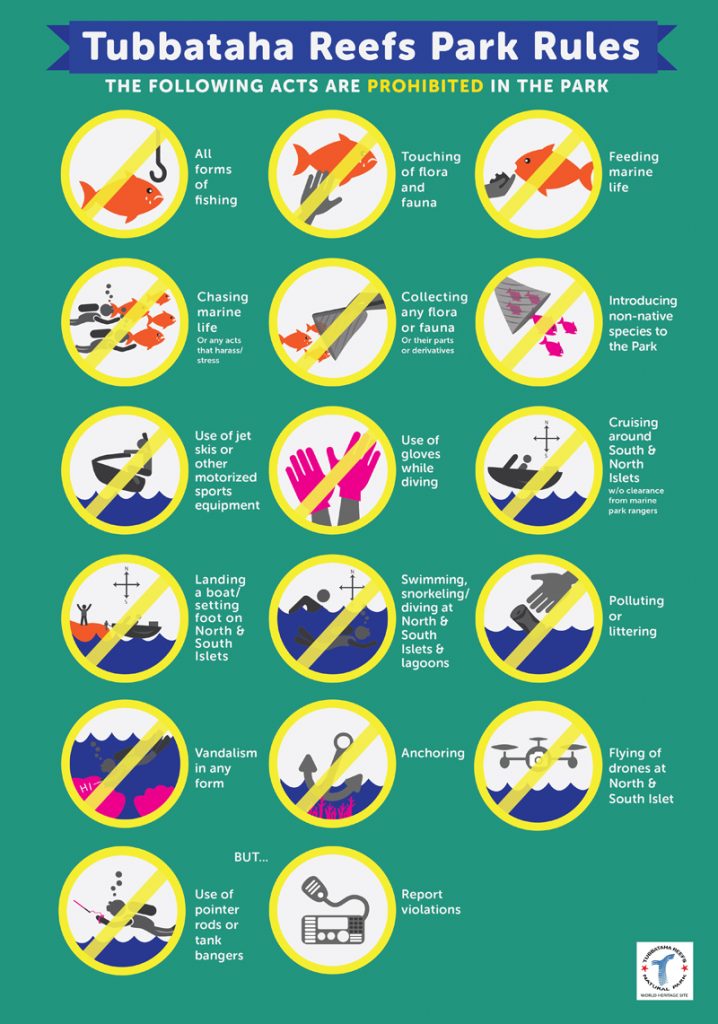 The Delsan Wreck located on the southeast end features a deep crack in the coral that extends out like an elbow from the wall, known as “The Cut.” Currents usually sweep through the V-shaped plateau, bringing along species like tuna, jacks, schools of barracuda, hammerheads, tiger sharks, and whale sharks that divers who come to Tubbataha look forward to seeing.

Black Rock, located at the northeast corner of Tubbataha is a long, gently sloping drop off where divers are likely to encounter eye-catching and playful species of fish called Sweetlips. This dive site is also known for sightings of emperor fish, snappers, bluefin trevally, giant trevally, and chevron barracudas. There are also multiple manta cleaning stations found in the area.

Multicolored sweetlips, bumphead parrotfish, and batfish roam the remnants of a log carrier in five meters of clear water. If you want to encounter the elusive hammerhead sharks, it’s best to schedule your dive early in the morning. When your dive is nearing the end and you’re on the shallow reef top gassing off your nitrogen, there’s a good chance to spot a school of bumphead parrotfish feeding on the coral heads. This site is often requested by visitors.

Diving along the wall of Seafan Valley gives divers, especially underwater photographers a wonderful view of sea fan colonies. These sea fans make the perfect underwater subjects because of their amazing branching structures and vibrant colors.

The name Ko-ok is inspired by the brown-footed booby that lives in Bird Island. This dive site is usually designated as the last dive because when the sun goes down, it unveils terraces filled with stunning white soft coral scattered among huge barrel sponges.
A wide array of fish species flock to Ko-ok especially on the reef top and during the new moon, the usually solitary enigmatic sailfin snapper gather here in groups. The largest shoal of bumphead parrotfish can also be found in these waters. The presence of a huge area of cloudy water in the distance is indicative of schools of fish with the remains of coral waste causing the blurry water.

Due to the short weather window, only a limited number of divers are allowed to explore this amazing reef system. BOOK EARLY to guarantee a slot for yourselves.

If you have any question, don't hesitate to contact us.