This book excerpt hits close to home because there is something about the sea that calls and draws you near. If you’re a scuba diver then you trenbolone acetate crossfit know exactly what this means because the sea is like your second home. The lull of the waves, the serene surroundings, and the beauty of the underwater world calm the soul.

If you’re looking for a new underwater realm to explore, Moalboal in Cebu is the place to go! Moalboal has become one of the best diving spots Philippines.

Pescador Island (meaning fisherman in English) is home to pristine corals and a wide variety of marine life. Nestled in the municipality of Moalboal, it is designated as a marine conservation area and a marine park. Visitors are required to pay an entrance fee which is used to support conservation programs. It is strictly prohibited to catch fish or collect any living creature within the marine park.

The waters surrounding Pescador Island is a sandy slope enveloped with soft corals up to 10 meters. It is followed by a wall surrounded by hard corals that goes down to about 40 meters. Divers from around the world come here to experience its rich marine biodiversity. For instance, you may come across fish of all sorts of colors, shapes, and patterns during your dive. Some of the common sightings are groupers, parrotfish, frogfish, lionfish, batfish, and ornate ghost pipefish. You may also encounter manta rays, turtles, and mollusks such as cuttlefish. Keep your eyes open for small creatures like shrimps and crabs that may be lurking among the corals.

When it’s your first time in this dive site, witnessing a bountiful marine life can be an exhilarating experience. The good thing about diving in Pescador Island is that it never gets old because there’s always something new to see. That’s why it doesn’t matter if you’ve been here multiple times. The excitement just builds up knowing that a mesmerizing world awaits. 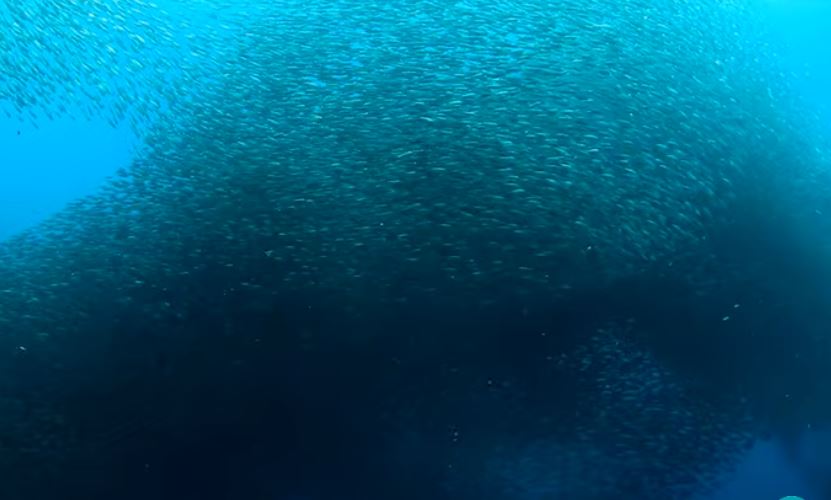 The famous Sardine Run in Pescador Island is in the bucket list of many underwater enthusiasts. The sheer number of sardines swimming along these waters is astounding which makes it a must-see nature show. The sardines stick together as a huge group as a form of protection against predators.

It is possible to swim in and out of the bait ball. When you do, the sardines will break up its position but later gather again and unite.

The sardines usually gather around Panagsama Beach and hang around just 30 meters off the coast. The opportunity to see a giant ball of fish made up of hundreds of thousands of sardines just below the surface of the water is an unforgettable experience. It has been claimed to be the second-largest sardine run in the world, with South Africa holding the first place.

If you love the thrill of wreck diving, you can explore the Airplane Wreck. This two-passenger Cessna plane was purposely sunk in Moalboal to create an artificial reef.

The movers dismantled the wings of the plane so it could be transported on a truck to Moalboal. Upon reaching the site, the plane was deposited in the Reef Club. The plane was placed on a sandy area on the reef floor in a depth of 20 meters. Divers partially filled the detached wings with cement to submerge them while they filled the hull with old scuba diving tanks. The parts of the plane were assembled underwater then a buoy was attached to the site to prevent dive boat anchors from accidentally damaging the wreck.

The artificial reef is now blanketed by corals. Different species of fish and other small marine creatures such as invertebrates rely on it for shelter.

If you want to experience these amazing dive sites in Moalboal, join Discovery Fleet on our next liveaboard Philippines to Cebu-Malapascua-Visayas. Go ahead and answer the call of the sea!