Snorkeling and diving with whale sharks

Get to know the whale shark

Largest fish in the sea

Did you know that the whale shark is the largest fish in the sea? Just imagine a fish that can grow as big as a school bus. This majestic creature can reach a length of 40 feet or more and weigh as much as 20.6 tons.

Whale sharks, locally called “Butanding” are noted for their unique white dots throughout their bodies. These distinctive spots are like human fingerprints which help identify individual whale sharks. 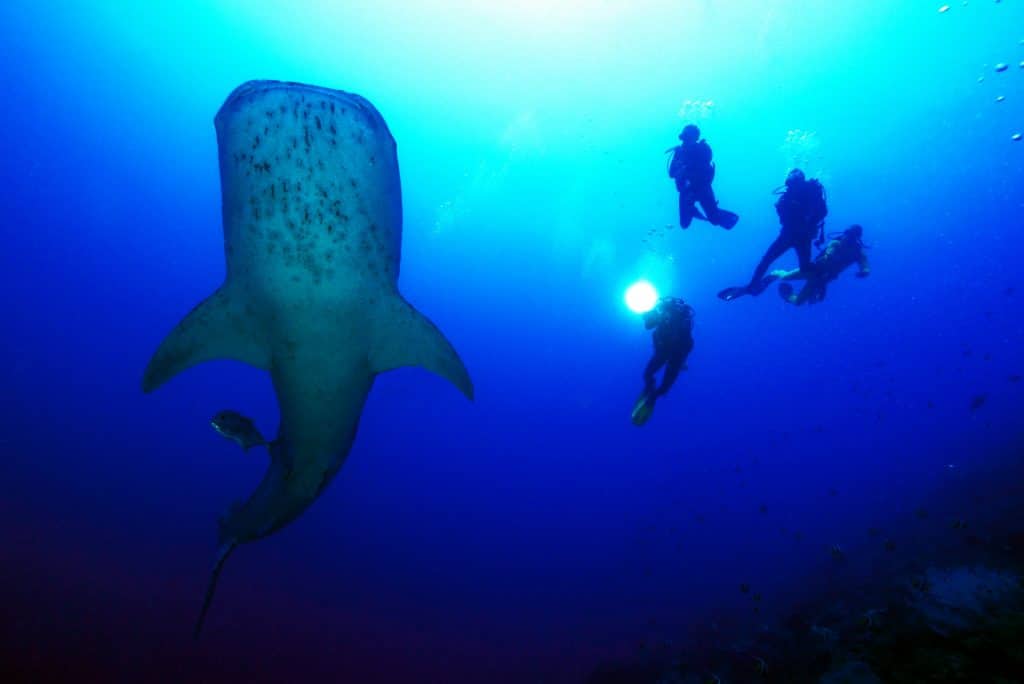 Despite their humongous primo tabs mouths, whale sharks are not harmful to humans. They are actually docile creatures that’s why they earned the nickname “gentle giants of the sea.” These sea-dwellers eat only plankton, krill, algae, fish eggs, and copepods.

The whale shark juts out its colossal jaw to let the water come in and filter everything that it engulfs. The water including debris is then released back into the sea.

Travelers of the sea

Think of whale sharks as jet-setters of the sea because they spend most of their lives traveling from one place to another. A great place to see these amazing creatures up close is in the tropical waters of Oslob on the island of Cebu. Most of the whale sharks that visit this area are youngsters that measure between 18 to 25 feet in length.

Want to experience snorkeling or diving with whale sharks? Join us on our Cebu-Malapascua-Visayas liveaboard Philippines adventure to see these gentle giants up close.

Whale sharks are considered endangered by the International Union for Conservation of Nature (IUCN) due to various human pressures such as fishing and ship strikes. This is why it’s vital to respect and protect these amazing marine creatures.

Here are some gentle reminders to keep in mind when interacting with whale sharks.

Listen carefully to the instructions of your guide or scuba instructor and follow them accordingly. Do not take briefings for granted because they include important rules that will help protect both wildlife and tourists.

Do not use sunscreen, tanning lotion, scents, oils, and deodorant when you snorkel or dive with whale sharks. Many of these products contain chemicals that are not only harmful to whale sharks but also corals and other marine life. For sun protection, it is advisable to use a UV protected rashguard. But if you have to use sunscreen, choose the reef-friendly kind.

When you reach the dive site, enter the water slowly and quietly as possible to minimize splashing. This will prevent spooking the whale sharks and driving them away.

Snorkeling or diving with whale sharks gives you the privilege to see them up close. However, this doesn’t mean that you can touch them. The sea is not a petting zoo and the marine animals are not there to be stroked or petted.

Did you know that humans can transmit diseases to whale sharks? This is one of the top reasons why touching a whale shark is prohibited to conserve and protect this endangered species.

If touching is prohibited, then it goes without saying that riding a whale shark is against the law. There have been horrific reports of tourists riding whale sharks as if they are horses. This kind of behavior can hurt and cause stress to these marine animals.

Under the Republic Act 9147, an Act for the conservation and Protection of Wildlife Resources and Habitats, it is illegal to maltreat or kill endangered species, like the whale shark.

Whale sharks are fascinating animals and the best way to appreciate them is by observing quietly from a safe distance – at least three meters away from the head and four meters from the tail. This way you can give whale sharks enough space and you will not disrupt them from doing their natural business.

The recommended way of approaching the whale shark is by moving towards it from the side or swimming alongside near its pectoral fins. If you see a whale shark swimming towards your group, you can separate into two sections to give it space to swim in between.

Taking photos is allowed but do not use flash photography to prevent frightening or disorienting the giant creature. Regardless if someone is watching, do not use your flash to avoid stressing the whale shark and other nearby creatures.

Keep in mind that you are just a visitor in the underwater world. It’s only fitting that you respect the home of marine creatures by keeping it clean. Do not leave any garbage behind.

Dreaming of snorkeling or diving with a whale shark? Book a trip with Discovery Fleet Philippines and make your dream a reality.